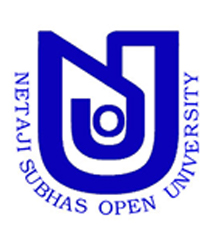 Following this, a State Act (W.B. Act (XIX) of 1997 and Recognised by U.G.C.) was passed on the 20th August 1997 in favour of opening a University for imparting Distance Education. Netaji Subhas Open University was established by bifurcated Netaji Institute of Asian Studies (NIAS) and in terms of the Act of West Bengal State Legislative Assembly and is housed in Historic building of Sri Sarat Chandra Bose, elder brother of Netaji. The University started functioning with effect from July 1998 Semester, only with the Bachelor’s Degree Programme in Arts & Commerce to provide an opportunity of higher education in the vernacular medium to various disadvantaged groups of aspiring learners. It is the tenth Open University of the country and the ninth State Open University.

Professor Radharaman Chakraborty, the then Director of NIAS was appointed as the first Vice Chancellor of NSOU. An Advisory body, consisting of eminent educationists and senior administrators was constituted to plan and oversee the activity of the newly opened University. They executed the preliminary set-up necessary for the functioning of the Open University and from July 1998, 31 Study Centres started functioning under Netaji Subhas Open University with a Bachelor Degree Programme (BDP) in Arts & Commerce. Since January 1999 semester further 5 study centres were opened with Arts & Commerce Courses under the BDP.

The Post Graduate Degree Programme in Science subject(Mathematics) and Arts Subjects (History and Social Work) were started in January,2002 and January, 2004 session respectively.